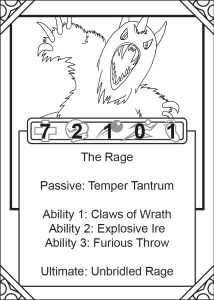 The physical manifestation of rage itself. This thing is a crazy monster that is never happy. Trust me, you don’t want to get anywhere near this guy.

The Rage is a bruiser that’s all about rushing in on enemies and knocking them around. It can blow up on command, throw its foes, it can even become more angry. As if that was even possible. Use this guy to create loads of pressure for your opponent’s army. If this guy keeps rampaging about then they’re going to have to deal with him which could create openings for your own team.

So yeah, you won’t like this guy when it’s angry… but then again, it’s always angry.