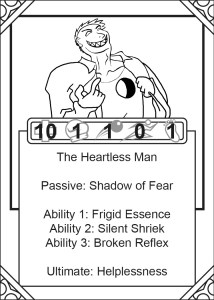 That hole in his chest and that comically toothy smile aren’t just for show. This guy is a truly monstrous beast. Some say he isn’t even human. His quixotic nature strikes fear into all who enter his path. A frigid pal falls on his surroundings, plants wither, and animals flee from his presence. If you should ever come across this guy then pray that he merely walks past. If not, then you better hope that there’s a benevolent after life because you’re about to meet it.

The Heartless Man is exactly as his name implies, merciless. Slow but sturdy, he walks forward without fear slowing his opponents as well allowing his teammates to catch up and pick them off. For the truly unfortunate he paralyzes them with fear and saunters over to finish them personally.

Death is kind in that it respects the living, but this guy doesn’t care. In fact, he can’t. 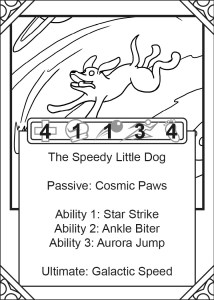 The power of the cosmos. The infinite expanse that is the universe. All of it, represented by a cute little dog that enjoys running.

This little one is all about moving about quickly and getting a lay of the land. Not so much about power, The Speedy Little Dog is great for reconnaissance so you can get a full idea of what your enemies are up to. Both fast and flexible this pup can even jump from one lane to another so help out allies who are in trouble or even to take out enemies trying to run away. Eternally loyal, The Speedy Little Dog is a great addition to any team. 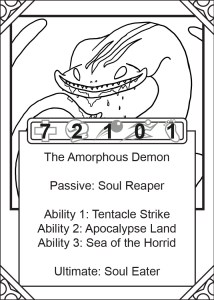 The Amorphous Demon is a waking nightmare. Truly a despicable creature. I don’t have to tell you to not underestimate her power. With qualities that sap enemy health and the ability to slide through the ground undetected you’ll want to keep track of her every move.

This Aspect’s all about causing chaos. She may not cause too much damage herself but keeping her foes on their toes is a great way to give her allies the upper hand. From poisoning the very ground you walk on to ensnaring you in her many tentacles you’ll either want to stay as far away from her as possible or find a way to take her out fast. 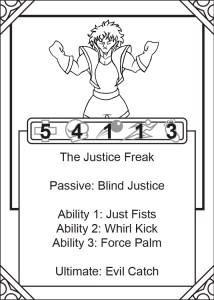 Our next soldier is The Justice Freak. This guy is all about destroying those he deems evil. Unfortunately, just like justice itself, he’s a little blind. OK, he’s literally blind. Hence, his passive actually makes it harder for him to land hits. But when he does get a punch in, oh boy, does it hurt.

The Justice Freak is built as a late game sweeper. You have to build him up early and then have him rain punchy justice on your foes to ensure your win. How do you do this, you might ask? Simple, his ultimate attack, Evil Catch, when used for a killing blow, will start a count down. Once he has used the attack to off five enemy Aspects then the debuff to his hit rating will disappear, normalizing it. After that, every kill will increase his attack power by 1 permanently.

If you can get him out early and use his abilities wisely then you’ll find this guy to be incredibly powerful. Just do your best to outlast your foe. After all, nice guys finish last, right?