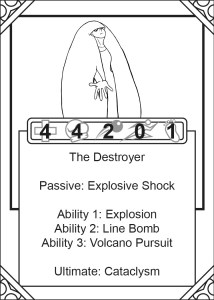 And some just want to see the world burn. Don’t let her looks deceive you for this is nothing more than the physical manifestation of destruction itself.

The Destroyer is all about causing as much damage as possible. With a power stat that big one can only imagine how quickly she wipes her enemies off the face of the map. By the same token, all her other stats are very low making her the very definition of glass cannon. Keep her safe and she’ll clear the way to the enemy base in no time. Even better, her explosive attacks can sometimes shock opponents causing them to lose their next turn.

So, watch where you step, otherwise, you might go boom. 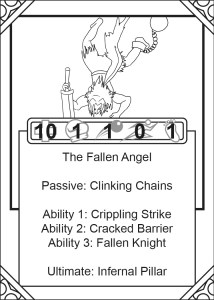 Winners write history and, boy, does this guy know it. He may have fallen from grace but he still upholds his honorable ways. The almighty may call him a villain, but he knows the truth.

The Fallen Angel, despite his looks, is a protector. He is all about keeping his allies alive even if that means putting his own life on the line. That low attack stat is simply a ruse. He’s a lot more dangerous than you think wielding that large broken sword. His abilities generally involve him weakening his foes so his allies can do better damage while keeping his enemies attention on him as well.

Lies and slander do not stop such a beautiful soul as this. Always remember, take everything you hear with a grain of salt. 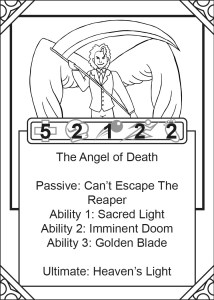 He’s well dressed. He’s professional. He absolutely LOVES his job. Everyone’s heard of this guy. The very personification of death itself. As an aspect he brings death swiftly his opponents on the battlefield. Watch your step because he’s most likely two more steps closer to you.

The Angel of Death plays exactly how you think. He’s an assassin style character who’s special quality is increasing his speed toward those who are low on health. The closer an enemy is to dying the faster he can catch up to them as his speed stat will increase based on how low that specific enemy’s health is. Keep in mind though, that he doesn’t have the best defenses himself so it’s best that he take enemies out when they’re by themselves. By the same token, keep in mind his ultimate attack, Heaven’s Light, which allows him to fly up into the air and then land wherever he wants attacking an enemy as he does so.

The Angel of Death is truly a scary opponent and one should really watch for him. Still, you can’t escape the reaper for death comes to us all eventually. 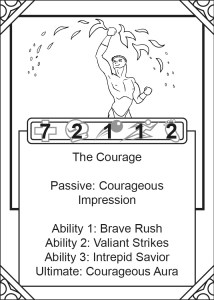 There are some who are undaunted by the evils of the world. They are the saviors of the weak. Jumping into battle without a fear these amazing people protect all and blow right through their adversaries.

The Courage is the avatar of courage itself. He is all about rushing into battle and causing mayhem amongst his enemies while getting any allies out of trouble. Having qualities both as a fighter and a protector gives him great versatility. He can even combine these aspects to allow him greater survivability during a fight or scaring enemies off who may be trying to kill his allies. Once he and his allies have the upper hand he can even activate his ultimate to send them all rushing down as a wave of death upon the enemy base.

One needs courage to fight to the fullest and this guy has it in spades.