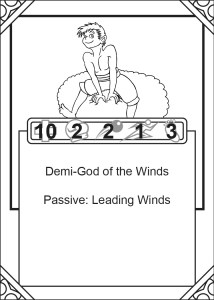 Your Aspects and Minions aren’t the only soldiers you can bring to the field. If you’re lucky you might pull a Demi-God out of the Void deck who will instantly join your team and act as an extra Aspect card.

This one is the Demi-God of the Winds. Demi-Gods don’t have abilities or ultimate abilities like Aspect cards but their passives affect the entire team allowing you an extra effect each time it’s your turn. This guy’s passive, Leading Winds, allows one ally to move at twice their speed each turn. You can even choose which ally gets the effect.

Use the power of the wind and you’ll go far!