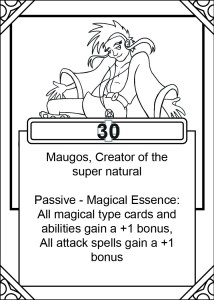 So, the most important thing about Hand of Heaven is the Creators. They’re those incredibly powerful celestial beings that act as living batteries for reality itself. Here though, they’re just playing cards with the very fabric of the cosmos. The aim is to defeat your opponent’s Creator using everything you have on hand. You cast spells, summon mighty aspects as warriors, and unleash tons of little minions to run down your foe’s fortress.

But first, lets understand what the Creators can do exactly. On their card you will see a picture of them, a number symbolizing the amount of hit points they have, as well as they’re name and their unique passive ability. Each Creator has a different passive that affects the board as a whole. Lets use Maugos here as an example. His passive increases the power of all cards that are considered magical in nature giving them an increase to their stats. Any abilities that are magical will gain an increase in power. He also causes all spells that cause damage to increase in power as well. Clearly, his whole shtick is to go in guns a blazing running down any and all threats that get in his army’s way.

But remember, Maugos isn’t the only Creator and the others have their own unique spin on how they approach their enemies.