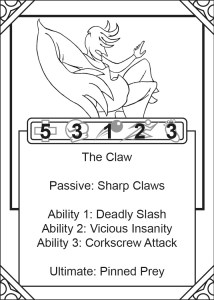 From the shadows it waits for just the right moment to pounce those least suspecting. The Claw is the very essence of the “predator.” A being so dangerous that no one is really sure what it actually looks like.

The Claw itself is a fast and powerful assassin style unit. It jumps in and hits hard so to scare its opponents. Its passive effect allows it to continue hitting harder and harder so as to create pressure. If used properly The Claw can cause your opponent to make mistakes making it great for both early and late play. Even if your opponent has the upper hand if this guy can scare them you might be able to turn the tide of battle.

The Claw is all about playing games with its prey. Just like a true predator should.