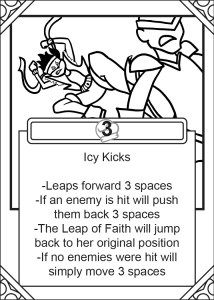 The Creators may have powerful spells that they can fling every which way, but the Aspects also have a bit of their own original flavor. Each Aspect has three abilities they can utilize in battle… as long as you pull up the card. These abilities range from attacks, crowd control, heals, curative effects, and so on. As such, each Aspect has their own way of dealing with different situations. Some may be more about running down the enemy and destroying them out right. Others may want to stand back and support the others making them great for survival.

Every Aspect also has an ultimate ability that can only be activated as long as they have a Core. Cores are special pieces that only come into play once an Aspect has been able to use an ability successfully. But, just like ability cards the ultimate card must also be drawn in order to be used. This makes these cards harder to control as you have two major requirements in order to activate them.

Abilities are integral in keeping control of the map so always be wary of what your opponent is doing. You may have a nice ability in hand, but they might have something far more devastating waiting in the wings.