We had a blatant omission to our submission for Game Chef 2016: Playtesting. Technically, Game Chef 2016 design is over. We’ll need to leave the rules and released materials alone for now while the reviews and judging are going. Still, we’ve got something worth trying so we wanted to give it a shot. The short story is: “Oops, it’s a little broken.” The longer story (below) is that it seems like there’s a fun game in there, with the right tweaks. We’ve got some suggestions if you end up trying to play it as it is today. Once the judging is over, we’ll release an update.

Printing went fine. It looks like the PDF makes for a good (if not quite standard) card and board size. Right off the bat after setup we noticed that the robot pieces have no distinguishing marks. We had to mark them with numbers to tell the robots apart.

When picking the first human, the instructions call for a dice roll. Not that most people don’t have ready access to dice, but they aren’t used anywhere else in the game. We opted to shuffle up the role cards and draw for first human (then reshuffle to distribute robot roles).

The instructions have the human draw cards before removing repair cards and shuffling the deck. Obvious one to figure out, but amidst the other confusing aspects of the instructions, this was a few more minutes of chaos getting going.

Clearly the kind of mundane things that should have been caught ahead of time! So it goes.

We played with four players (fairly standard choice). The first game was with all cards visible (no hiding hands). We didn’t play it all the way to completion, because of the biggest hole we found: nothing really got built! On top of that, it took forever for the first two transfers (triggering repair activation) to occur. Clearly the robot move balance was way off.

Most of what we found were clarification issues. I’ve moved those to the bottom of this post

About halfway through we decided we understood the rules enough, and were getting annoyed with how little was actually happening. Time to play right, with some fixing up.

The lack of real action made a few adjustments necessary:

Both are crucial to making the game a little more lively.

The second game played fairly well. We had one major snag- we had the hardest time keeping track of which robot went next. In the end, my son lent us a hand in the form of a turn marker: 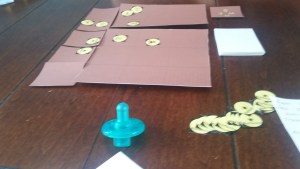 Beyond that, gameplay went pretty well. We robots managed to get enough transfers going early to hide any obvious conclusions of who was who. The human for the round got a lucky break when a second repair against me failed after a first succeeded, ruling me out entirely. She ended up correctly identifying the sentient robot about 20 minutes in. Not a bad little round.

Still, it was unanimous that the reflectors weren’t doing anything. Even with the change of building on move, less than a quarter of the board ended up built on. We made a drastic change for the next game. But first…

It was quite challenging to keep information hidden. An idea I abandoned early, privacy screens, nearly came back into the picture. We found a solution to the problems that arose, although more likely exist. So far, the game seems to rely on players willing to stick to the spirit of the game to work. Regardless, here’s what we learned:

We had time for one more game. Building was doing essentially nothing; neither was moving. So we confined quarters a little. The board got stripped way down to a 3×3 square. We kept the same rules about building on move, so now it was a little more likely that the board might get filled.

It was also clear that there wasn’t quite enough pressure not to waste repair cards. We removed one from the 4 player game, down to 5 repair cards for three robots. This turned up the pressure quite a bit, since it removed quite a few simple logical tests to find the sentient robot. As a consolation, we did away with the multiple-repair rule and allowed back-to-back repairs against the same robot. After all, its a pretty big gamble to go two repairs deep into one robot unless you’re already sure.

This game played really well. I was the human. I found myself trying to track more information than I could to determine who the sentient robot was. In the end, all I could remember was which transfers had occurred and a few File Browsers I had done early on. My strategy was to herd the robots into the transfers I wanted to test. I got a lucky break when I was able to pin one robot for four turns and keep the other two interacting and giving away information.

Towards the end of the game, once it was clear I was close to figuring out the sentient robot, the tension of the game let up a little early. The robots began malfunctioning a lot just to sabotage the possibility that I could wait out the factory build. I think the next play will add this as a mechanic; once the repair cards come into play, the robots can win by destroying all solar collectors.

Below are the remaining clarifications that were discovered: